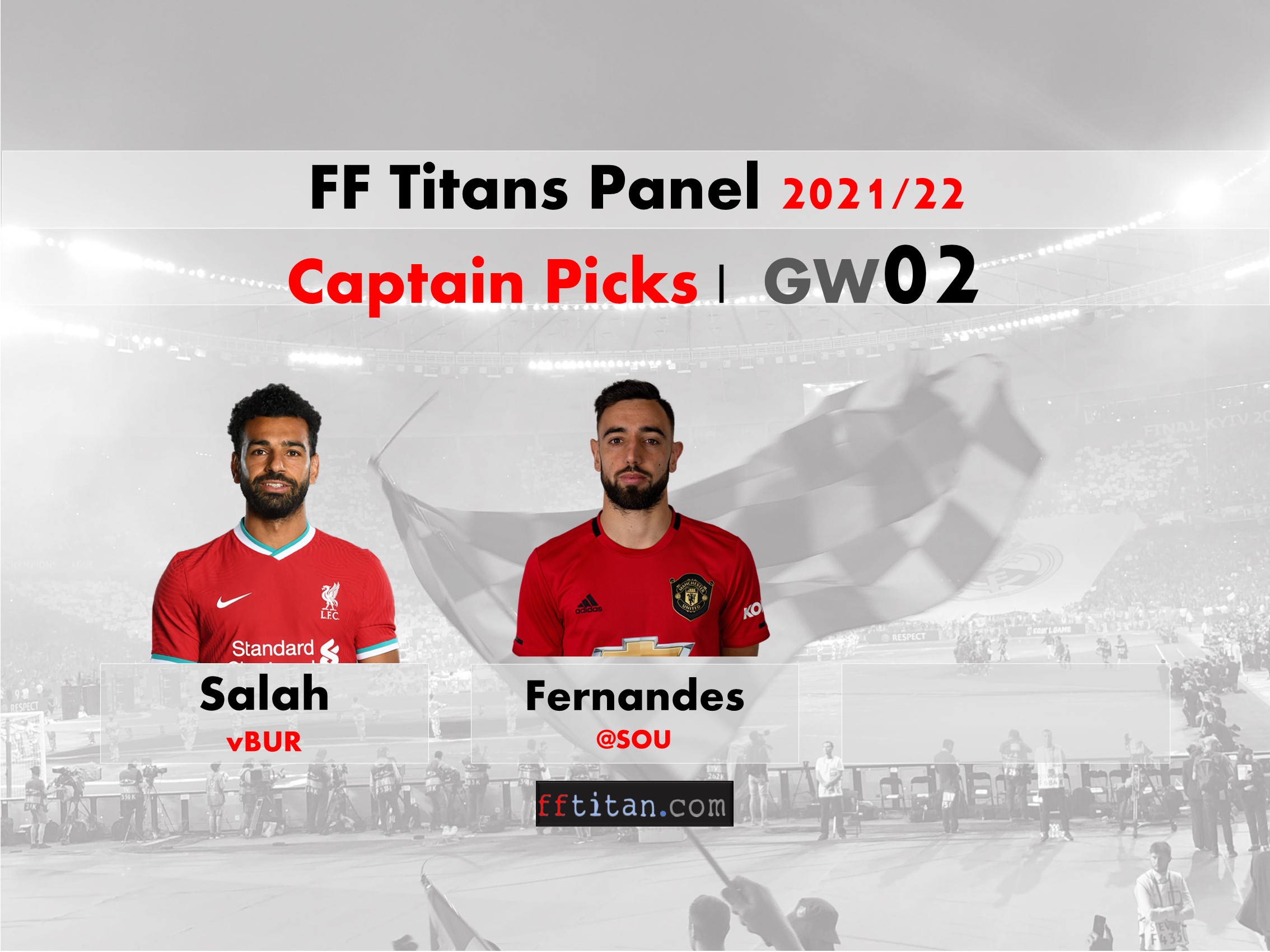 GW02 is present a conundrum for many FPL managers – Salah OR Bruno? We let our panel do the talking. 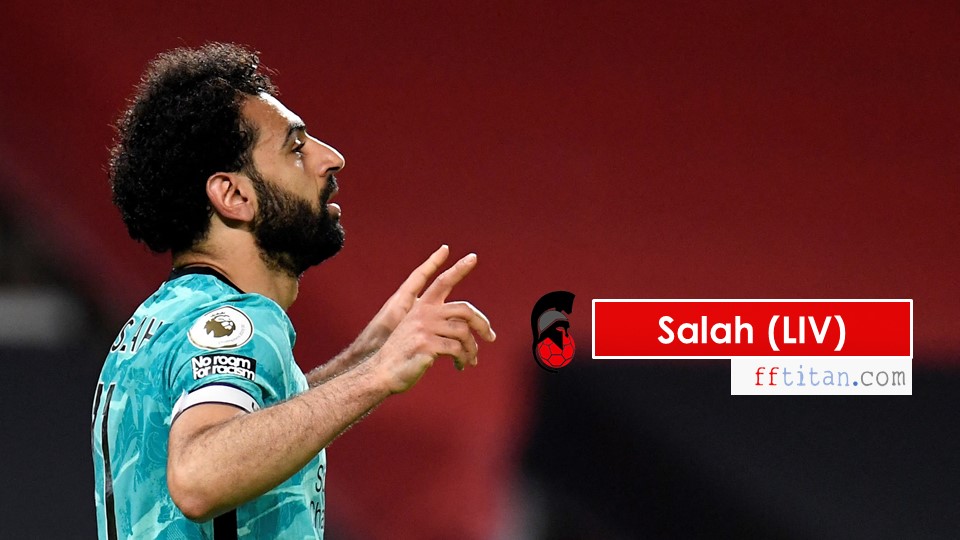 Salah (MID | 12.5) at home to Burnley is too tempting to overlook – the Egyptian will be given the armband this week.

This week’s captaincy decision is a difficult one.

I am currently on Salah (MID | 12.5) who will have the home advantage over the only other contender for me (Bruno Fernandes). Both players were looking sharp and hungry and both play opposition who conceded a lot of chances in GW1. The fact that the Saints have lost Vestergaard pulls me in the direction of Bruno but the Anfield crowd is likely to be what seals the deal for me.

Both Salah and Bruno are strong captaincy options.

Usually I don’t tend to captain the early game fixture but I’m making an exception with Mo Salah (MID | 12.5). Liverpool’s first home game with a full crowd for the first time in 18 months is going to be electric. I expect Liverpool to raise their game and the intensity will be too much for Burnley. Salah to haul again. 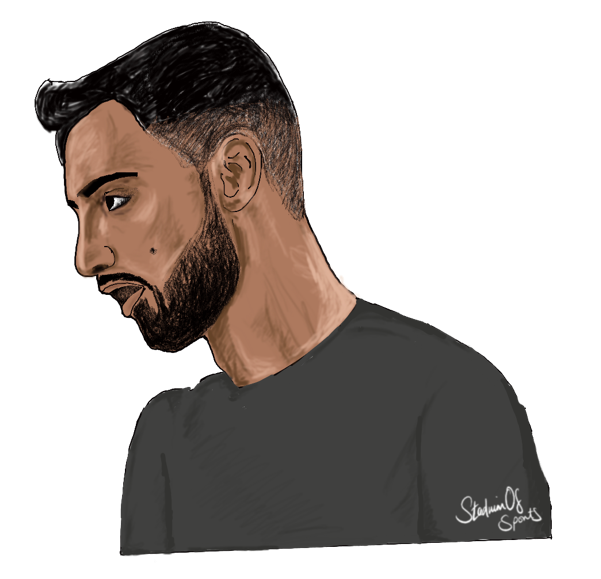 If you only own one of Salah or Bruno this week then you have the easiest of decision.

If you own both of them: a) be happy and just think of the extra points that non owners will not get. b) go with what you gut says.

There are pros and cons to both of these players and really is a coin toss of a decision. For clarity I am captaining Fernandes (MNU | 12.0), but really don’t be hard on yourself if the captain you select is outscored by the other this week. And remember that it is a marathon, not a sprint.

The bookmakers favour Salah (MID | 12.5) by some distance this week, and with justification. Burnley have lost 8 of their last 10 Premier League games, conceding 20 goals in that time, including a 3-0 defeat at home to Liverpool back in May. And while Burnley have avoided defeat in their last 2 visits to Anfield, both of those games (1-1 and 1-0 to Burnley) took place without fans.

Fans are back now, and we saw the immediate effect of this with 7 home wins in GW01. Only 3 home sides lost in GW01: Burnley, who haven’t won at home since Jan, Norwich who were always fancied to lose to Liverpool, and Newcastle who started strong and led at 2-1 half time.

Home advantage is huge right now with packed stadiums, and while Bruno is not a bad choice given Southampton’s defensive issues, I’m backing Salah (c).

I’m hearing all the Salah talk and despite Liverpool only winning 1 of their last 4 against Burnley, I’m going to go Salah (MID | 12.5) over Bruno.
Liverpool are playing at Anfield in front of a home crowd, which should give them an advantage, and Salah looked very sharp against Norwich, so I shouldn’t be disappointed.

Captaincy pick for this week is as easy as counting 1,2,3.

Its either Fernandes or Salah.

Salah (MID | 12.5) will be my choice because of the sole reason that they are at home against Burnley and with fans returning, you can expect lots of points from all the Liverpool forwards.

Many would have planned to bring in Mahrez for this week as Man city are at home against easy opponents but from their game against Tottenham, without De Bruyne, Man City do not seem themselves. Best to avoid Man city players for the time being and remain with Salah or Fernandes.

Salah has scored 1 and assisted 2 goals against Burnley in his 7 appearances. Most importantly, he hasn’t scored against them for 5 straight games. Meanwhile Fernandes has 2 goals and 3 assists against Southampton in his 3 appearances.

The captaincy decision comes down to the proverbial flip of the coin between Fernandes (MNU | 12.0) and Salah (MID | 12.5).

The Saints’ defense looks even more obliging than season’s past and Bruno’s finishing looks more precise than before. Mo Salah’s attacking work rate passed the eye test with flying colours, which when combined with a packed Anfield, makes for a devastating combination.

There are no wrong answers between the two and it’s a question of who will return more points.

My armband will get decided on a gut feeling right at the deadline.

For me its Salah. Tops the metric, Tops anytime goal scoring odds, at home in front of a rocking Anfield and high Expected Ownership. Enough ticks in the box for me.

With the fans back at Anfield, Salah (MID | 12.5) is one of the favourites for the captain armband this gameweek.