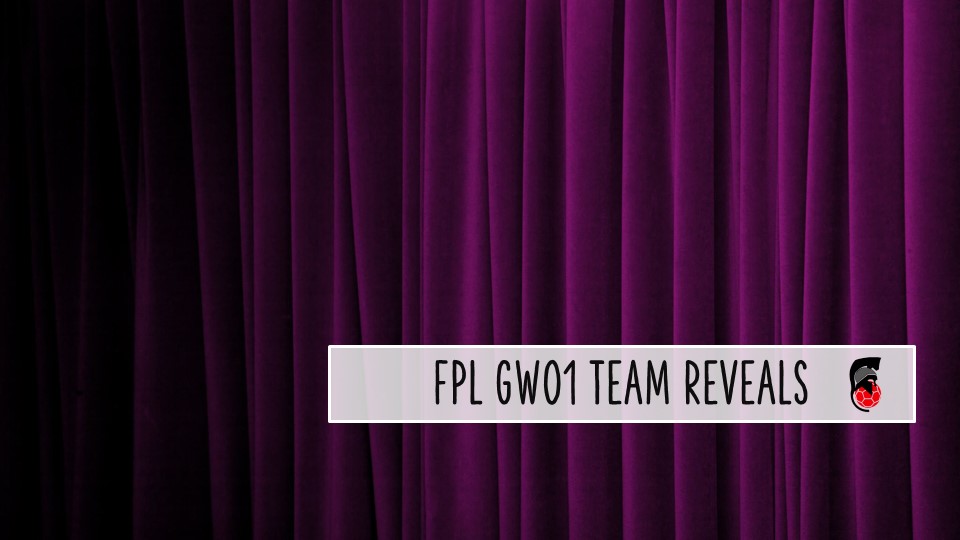 The GW01 is merely 2 weeks away from us and already 2 Million fantasy managers have joined FPL.

We asked some FPL content creators to send us their current drafts.

@FPLUnited08 finished with an overall rank of 37K last season and is eyeing to make the top 10K this season.

Here is how I’ve structured my team: 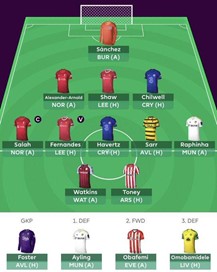 In my opinion starting the season with £4,5m and £4,0m goalkeepers is the most effective strategy. Most seasons a £4,5m goalkeeper ends the season being the best value goalkeeper because they are normally the ones who make a lot of saves (= save points).

I think Meslier, Sánchez and Bachmann could all do well this season but I’ve gone with Sánchez because of how good Brighton’s defense were statistically last season and also for cover for the Brighton defense now that Lamptey is injured and potentially Dunk too. Brighton’s opening fixtures are better than Leeds’ and Watford’s too.

I personally like to get defenders that are generally nailed for the season so I don’t have to waste a transfer out on them because spending transfers on attackers has more upside.

Even though Chilwell has the small threat of Alonso I feel him, TAA and Shaw are all generally nailed for the season and it covers the best defenses in the league as well as those 3 players having brilliant attacking threat for defenders.

Salah and Fernandes are my 2 premium midfielders who I will look to captain multiple times in the first 10 GWs and over the rest of the season.

If Chelsea don’t sign a striker, Havertz can be great value playing OOP at False 9. Chelsea also have some great fixtures in the first 10 GWs and that’s why I have picked Havertz.

I have picked Sarr and Raphinha because I think they will be great value players.

I have picked Toney because I think he can also deliver great value. The other forward spot is between Watkins, Antonio and Wilson who I think will all do well over the season but I’ve picked Watkins because of Aston Villa’s good opening fixtures.

Foster could get some game time this season with it being his last in the Premier League, Ayling will be my first bench option for the majority of the season and Obafemi and Omobamidele are the best options at the lowest price brackets in my opinion.

The team and structure are pretty set. I can’t see many changes unless some major transfers happen like Grealish to Man City but most of these players won’t change.

FPL Obsessed (Matt) has been playing FPL for the past 18 seasons and has his best overall rank as 2489 in the 2010/11 season. He finished the last season on 23K OR rank. He also has launched his own book – FPL Obsessed: Tips for Success in Fantasy Premier League. You can buy his book here

For those who know me, you will already be aware that my priorities for a pre-season squad are threefold:

With that in mind, here’s how I currently stack up: 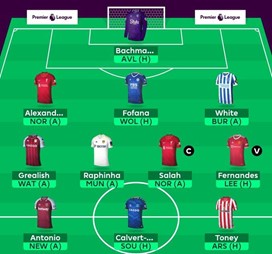 Enthusiast FPL is a medical aspirant who is in love with tis game of FPL. He finished the last season on 4,444 OR which is also his best rank till date in FPL. 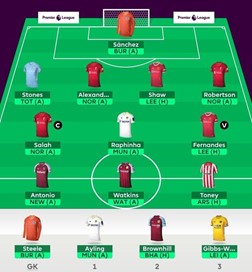 I’m playing it safe at the start as usual.

Settled on  2 premium attackers after toying with 3 briefly & not liking the balance of the team.

Kane can come in for Fernandes if he gets the move to City.

Sanchez is the best 4.5m playing GK according to me.

Watkins is an easy pick with those tasty first 3 fixtures.

Toney could score a few in an attacking Brentford side and is probably a safe pick with high ownership.

I’m sold on a Liverpool triple up with those fixtures. Prefer Robertson over Jota for the greater security of minutes & potential for more CS with Virgil Van Dijk back & Konate’s signing.

City as we know can keep a CS against anyone. I like the look of Stones plus a 4.5m defender as the 1st sub. Though he has competition from Laporte, Stones has never been subbed on for a 1 pointer last season, blocking the auto substitution.

It’s between Antonio and Wilson for that final spot. Like them both, but will just have one of them since going with both could be like booking a transfer with their injury record.

FPL Goat is an expert in weekly threads, captaincy articles and tips. He has gained a huge fan following on Twitter with 21K+ followers. Have a look at the captaincy planner he made for the first 18 GWs and then explore his team as well. 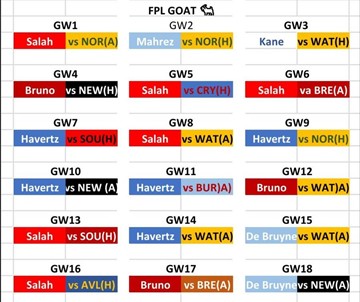 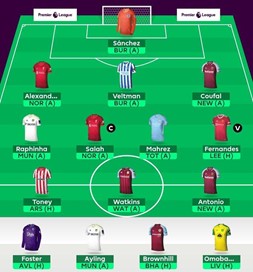 Trent, Salah,  Bruno, Sanchez, Watkins and Antonio are probably locked into my team.

Toney is still a bit of a risk as he is new to the premier league but I really like the price point and he had the best EFL season of all players of the three promoted teams.

Veltman is probably my best £4.5m defender of choice alongside Coufal, who had the second highest number of assists last season.

Lastly Riyad Mahrez currently someone I am really looking forward to take a punt as I think he will start majority of the games initially.

Mihir is a FPL manager from India who finished 44K OR last season. He is currently one of the most loved guy in the FPL Twitter community. 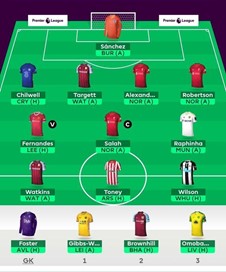 I’m going with a triple-up of Liverpool with Robertson, Trent-Alexander and Mo Salah.

I’m also not going with Luke Shaw due to his injury uncertainties and Chilwell being a worthy and differential pick. I

I’m not yet sure about my goalkeeper since I’ve 0.5M in the bank. Fernandes, Raphinha and Watkins speak for themselves and I’m really impressed with Toney’s performance in the Championship.

FPL Osama is a huge Liverpool and FPL fan. He’s a great content creator too and has produced mesmerizing articles and threads.

So here is my current draft” 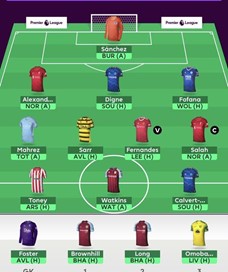 The only locked players for me are Sanchez, Trent-Alexander , Digne , Salah , Bruno , DCL and Watkins.

TAA is for me the best defender to own if you play FPL, always  boasting impressive attacking returns.

Digne has a very good starting fixture and he has always been a great attacking threat and on some set pieces and corners.

Mo Salah and Bruno as they are locked for me.

My differential will be Mahrez whom I think won’t be rotated with Foden injured and Sterling playing well into the summer with England; the same can be said of Bernardo Silva.

Calvert-Lewin and Watkins are locked for me . Decent starting fixtures and have the appeal to start the season strongly. My 3rd striker is currently Toney who has impressed in the Championship. However, it’s 50-50 between him and Wilson.

Potential changes in the draft : Add Robbo – no Mahrez – Toney to Wilson