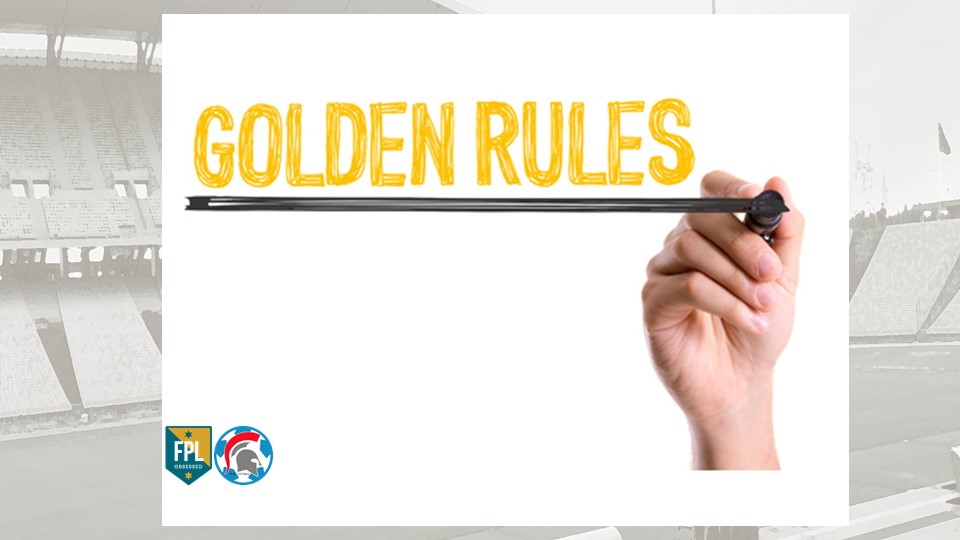 fpl_obsessed made some early FPL Golden Rules earlier this season and benchmarked himself against those at the mid-season point.

At the beginning of the season, I decided I was going to set myself 10 Golden Rules which I must follow for the entire season.

These were mostly things which I already believed to be good practice, but some were new ideas which I wanted to try out to see if they were effective.

With almost half the season already done (can you believe it!?), I thought it would be a good time to review the effectiveness of these 10 Golden Rules.

Perhaps the most controversial of my Golden Rules and one which was meant to alleviate the stress of captaincy selection.

It was tricky initially because I started with both Salah and Aubameyang, who were both priced at £12m, therefore an element of judgement (which the rule was designed to eliminate) was still required. I chose Aubameyang as my captain for the first 2 GWs until Salah’s price rise locked him into being my perma-captain.

I had a look back at the numbers and, so far, the strategy has worked well.

Assuming I’d have captained Salah in the first 2 GWs, and then looking back over the game week history to see who I probably would have captained in each game week, had I not been locked into my own Golden Rule, I would be looking at 125 captaincy points (Salah from the start) as opposed to 87 (if I’d moved my captain around each week) – NB: I have excluded GW9 when Salah got Covid.

A 38-point difference, which at this stage of the season, is roughly the difference between the Top 50k and Top 10k tiers.

The strategy is not without its flaws, however.

GW8 was a source of major anxiety for me. An in-form Kane was playing West Brom who had conceded an insane number of goals. Meanwhile, Salah was playing Man City at The Etihad, arguably the toughest fixture of the season.

With over 60% of managers captaining Kane, I was convinced my OR was going to take a beating. Fortunately, Spurs were quiet and Salah matched Kane on points so there was no damage done and, in fact, I had an advantage over the many managers who gave the armband to Son.

I won’t lie, I was sorely tempted to break this rule, but I am glad I didn’t. The strategy only works if you stick with it through all game weeks, even the difficult ones.

Despite this, I doubt I will carry the rule forward to next season. The stress it was designed to eliminate has been replaced by an anxiety during the weeks when Salah is clearly not the correct choice.

I have stuck to this (except for one GW where I took a hit to bring in Jota who then got injured) and it has been worthwhile.

My team value is nothing to shout about (currently at £102.8m). Other managers who have taken lots of points hits to jump on bandwagons are boasting huge team values – by getting in the popular players early and avoiding price drops/rises. This will give them a budgetary advantage as the season progresses.

But it is overall points, not team value, which dictates your final rank, and I am currently sitting in the Top 65k whilst a lot of the managers, with higher value teams, are lower than 1m.

This Rule is based on the philosophy that rushing to bring in a player who is performing well, also means getting rid of a player whom you have not really given a chance to.

So often, those players you lose patience with and ship out, start returning while the bandwagon players you have brought in, start blanking.

Therefore, avoiding points hits is not just about retaining points. Having limited free transfers is a natural mechanism of the game which forces you to exercise patience with the players you have put faith in. Points hits override this mechanism and can lead to some agonising results.

I have stuck to my guns on this one too. So far, I have made sure that at least 5 players in my squad are a differential pick (defined by me as less than 10% ownership).

It is hard to assess the benefit of this strategy without knowing which non-differential players I would have had in each position, which is impossible for me to retrospectively predict.

My gut feeling is that I have enjoyed a few benefits others haven’t: 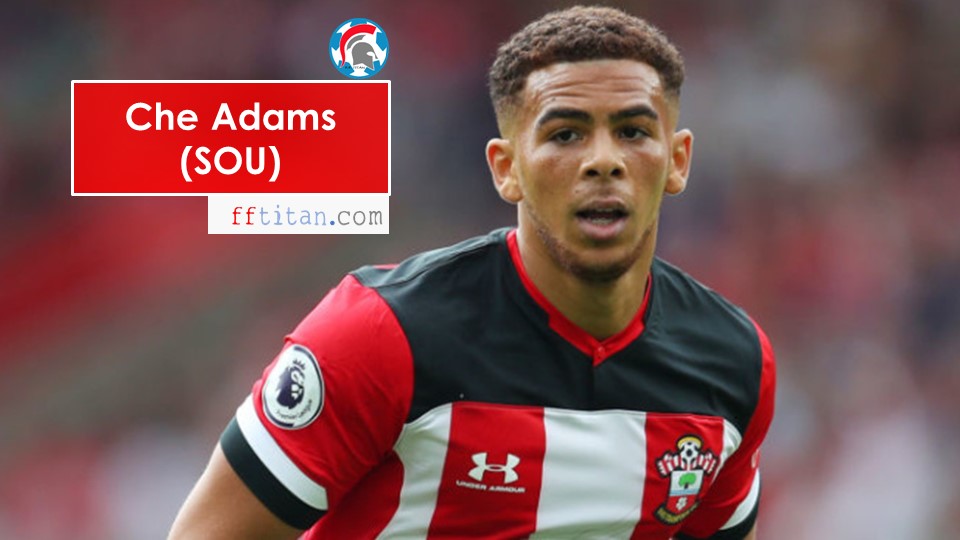 Overall, I think having 5 x differentials has made a positive, albeit minor, impact on my current rank. I will continue with this rule in my push for the Top 10k.

My biggest fear with my initial squad was not having Werner but this Golden Rule locked me out of having him and I am very glad it did.

For the first 4 game weeks Werner only returned 11 points. Those managers who stuck by him were well rewarded by his 16-point haul against Southampton and his return rate began to increase (7 points in both GW7 and GW8) but this has since dropped right off again.

The same disappointment has been mirrored by owners of Havertz and Ziyech. Even if Werner and Co. had started firing mid-way through the season, there is sense in allowing a player from another league (no matter his reputation) time to bed into the pace of the Premier League, especially when they are playing for a team who are in major transition as Chelsea have been this year.

I will be following this Golden Rule at the start of every season because I think it is key.

I think this may be the season that FPL have not cocked up and left ‘The One’ out there.

There has been no standout, unexpectedly cheap option this year – like Lundstram last season, or Wan-Bissaka the season before.

Owners of Bamford and Wilson will be feeling they have got good value at just over £6m but I wouldn’t say they’ve had the impact of ‘The Lord’ in the 2019/20 season.

The big wigs at FPL Towers deserve a pat on the back this year because they haven’t really got it wrong. 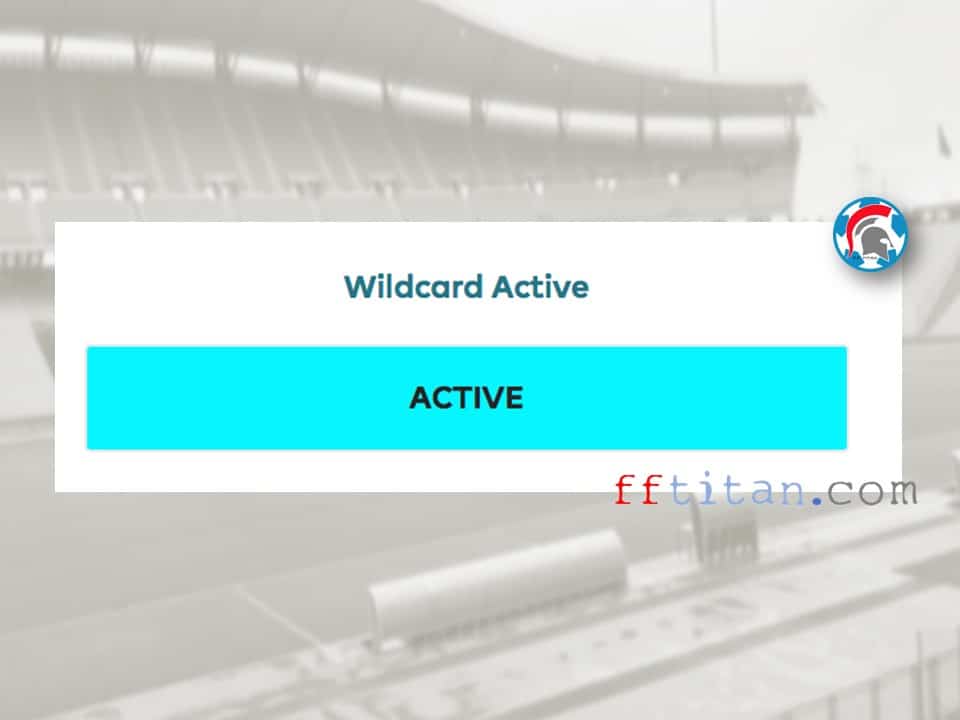 It has been very tempting at times, but I have resisted using it until GW16 (when I otherwise would have lost it).

What has helped is the fact that I have had a rare, good start. My team has been returning well most weeks, even when I have not been happy with it, and a big part of that has been the unpredictability of this season.

If I had been languishing in the 3m OR area, as many of my fellow FPL managers were, I probably would have used it earlier. It is much easier to exercise patience and discipline when things are going well. Conversely, when your OR is low and you need a big rank boost, you have to take more risks to get ahead.

It remains to be seen if I have put it to good use. When DGW19 is over with I will get a better sense of how it played out. Either way, I always feel wildcards are worth holding onto for the ‘rescheduling chaos’ part of the season.

#7 Use a budget template to set up my initial squad and keep £0.5m in the bank

I am so, so pleased with this Rule and will certainly be incorporating this into next season. It is my first time doing this and it feels like it could be where I have been going wrong in previous years.

Basing my squad on tactical price points has given me total flexibility to do what I want and jump on certain transfers quickly. There has not been a single occasion where I have said to myself ‘I want that player, but I can’t afford him’.

No matter what the position, I have allowed myself the freedom to move players in and out, at almost any price point, which has saved a lot of frustration.

When it became crystal clear that Kane was firing on all cylinders, I was able to get him in one move. No hits, no having to change anything else. The £0.5m in the bank was a life saver early on.

#8 Don’t be afraid to burn a free transfer

I have had so many small fires to put out this season that I have not yet burned a free transfer, however, if the time comes where I feel it is the right thing to do, then I won’t hesitate.

#9 Be strategic with my chips

I still have all three of my chips and will be saving them for the usual reasons:

I have been quite good at turning down the social media noise this season and have stuck to my own principles.

Social media and the FPL Community can be a gold mine of useful information and (generally) consists of a nice group of like-minded people who are truly passionate about FPL.

But it can be a loud and confusing place too.

Everyone has their own playing style and will play the game differently. If you scroll down the endless opinions (mine included) on social media looking for an answer, you will end up more confused than when you began.

Points chasers will take -4s and -8s to bring in all the big hitters and will be greatly rewarded or punished depending on the outcome. Risk averse managers will stick with their squad, preferring to spend their transfers putting out minor fires in a way which may seem boring to others.

Neither way is correct.

It is about how you enjoy playing the game. Look inside yourself, not to social media, to make your FPL decisions.

*
Whether or not these Golden Rules will guide me to a Top 10k finish (or better), I shall have to wait and see but, sitting here today approaching GW18 at 63k globally, with all three chips and my WC2 still intact, I would say I have had a decent start.