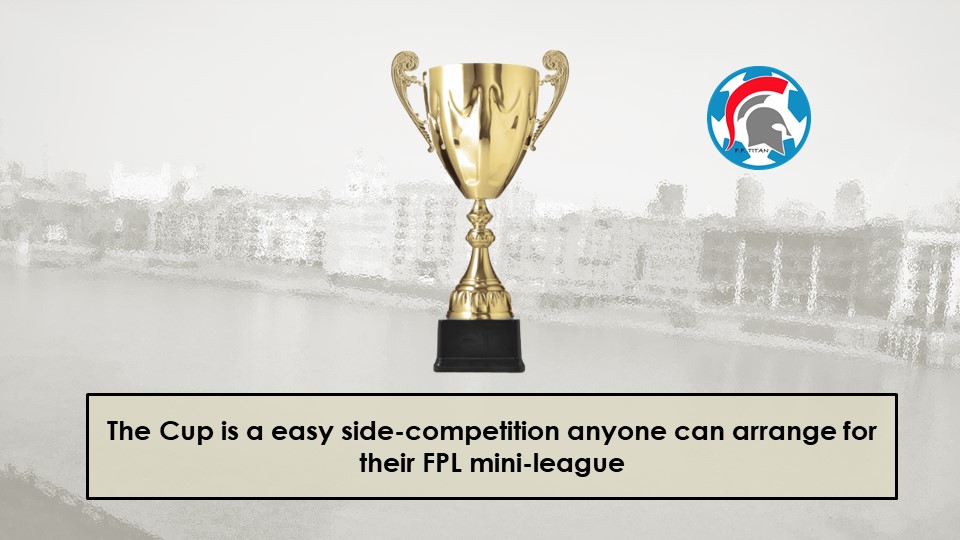 As most ardent FPL managers would know, currently, the FPL offers two broad ways to play the game – 1) Classic, where league tables are sorted by cumulative points you score over the course of the season or 2) Head-2-Head, where you are ranked by the wins you manage over your rivals on a week-by-week basis.

There are more variants on how to play the game, within the construct of the current app. Here’s some of them:

The Cup is a easy side-competition anyone can arrange for their FPL mini-league. It is a good supplement to the mini-league and and revitalize interest of FPL managers who are already miles behind their rivals or started their FPL season later than everyone else. There good webpages out that like Challonge that easily creates the tournament brackets you need to run a Cup competition.

FPL managers pit against one another based on their GW scores in single-elimination game – the winner of the tie progresses. The tournament bracket can be decided beforehand (eg based on life-to-date scores as at a certain GW) or totally randomized. The administrator can decide on a single GW round or even add spice into the cup by doing “home” and “away” fixtures, where a Cup round is based on scores accumulated over two game weeks.

It’s easy to administer and a 16-team single leg Cup will take 4 GWs to complete. However, it takes creativity to set tie-breaker rules. It can be based on Overall Ranking or even a coin toss.

Another variant of the Cup competition for your mini-league is the World Cup. It takes 32 teams to play the current FIFA World Cup format so here’s a suggestion – start a league at any time (to help managers who started FPL late) then use 4-6 GWs as “qualifiers”.

Thereafter, the top 32 teams qualify for the tournament proper. GW X+1 to GW X+3 is the round robin stage – the administrator would have to split the teams up into 8 groups of 4 and pit them thru a set of fixtures, where a H2H wins give 3 pts so on a so forth. An additional rule can be added here to state that if 2 teams end the GW within 5 pts of each other, the H2H is counted as a “draw” for the purpose of the World Cup. GW X+4 onward is the proper knock-out stage and the tournament bracket is set from that point on.

A bit of offline management is required here to sort out the Round Robin stage and this format is worthwhile for mini-leagues of at least 32 teams and more.

Also known as “survivor”, this variant is popular among FPL managers. The premise is simple – the mini-league starts with a fixed amount of teams and after each gameweek, the teams in the bottom of the pile gets “eliminated” and hence gets kicked out of the mini-league. The “bottom of the pile” in this aspect can be based on accumulated scores of points of each GW, depending on the administrator.

For example, say the league has 100 teams. On GW01, the bottom 20 teams get eliminated and are kicked off of the mini-league. On GW02, based on that GW’s scores, 10 bottom teams get kicked out. An elimination formula gets calculated such that there are only 2 teams left in the league by GW37 and both teams essentially play off for the championship.

This takes some effort to administer and communication outside of the FPL app is required to keep all others up to speed on what is happening in the league after they have been eliminated.

A slight variation to the normal format and works best if there are 30-40 teams in the league. In this variant, the manager who tops the league for that GW gets to choose who he wants to eliminate from the league.

Naturally, any manager would choose to eliminate the manager whom he thinks will pose the biggest threat so key here is for any manager to constantly be on the top.

Beware – we expect friendships to be tested in this variant.

This format will take much administration and will span over many seasons. To start, perhaps 20 managers can set up the inaugural season as the top division. Subsequently, any new joiners form the next division and there will be promotion and relegation based on the teams’ end of season finishing.

This variant adds glory to the winner of the top league as it literally take years of consistent performance to get there.